Aus-China-USA forecast. Cloudy with a chance of fire and brimstone. US inflation and Australian housing…doubling down on negative negatives.🔥 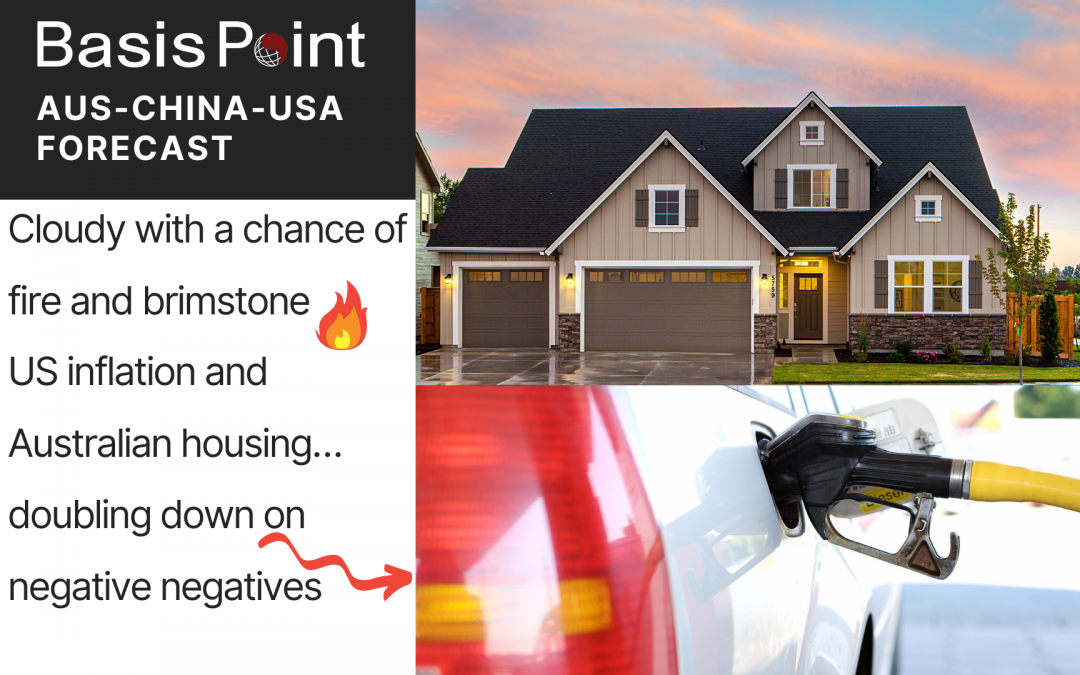 It’s been 17 months since my last Aus-China newsletter and a lot has happened.
“A lot” is an understatement but I can summarise it in 5 words.
I told you so (again). Links to my past forecasts are below.

So what’s next for an investment world buffeted by national security and animal spirits?
It’s the US annual inflation rate…starting with a 3…compared to the current 1.7%, and thus driving interest rates higher and asset values lower.

Bottom line is…the US annual inflation rate to be announced on April 13 (USA Time) will be 2.3% and on 12 May will be 3.3%. (I am assuming March and April 2021 monthly inflation will be around 0.3% each month…slightly less than Jan and Feb inflation numbers…impacted by stabilizing commodity, energy and food prices; rising COVID stimulus; and stronger pricing power for those companies that survived while competitors closed during COVID).

So benchmark US 10-year bonds can be expected to climb from the current 1.7%…think 2-3% in line with inflation (however, note that June and July 2020 were positive 0.5% each month, so they will be eventually subtracted from annual inflation rates, although future monthly inflation should rise due to a decoupling of China from the USA).

And with another $2 trillion of infrastructure stimulus likely coming on top of the current $1.9 trillion COVID stimulus, (infinite money printing) more pressure on long-term interest rates will come, despite the US Fed’s efforts, causing losses for US bond holders.

China is the world’s biggest US bond investor (if you add Hong Kong’s $227b in US treasury holdings to China’s $1.07 trillion vs Japan’s $1.25t).
With geopolitical tensions now approaching fire and brimstone conditions, China might sell their holdings sooner rather than later, not wanting to fund their competitor’s debt-fuelled economic growth (as their exports to the USA diminishes from the trade war, China no longer needs a weaker yuan. A stronger yuan is a consequence of selling out of US holdings…see my past newsletters below).

As they sell, bond yields will rise further, inflicting damage to record high asset prices such as stocks and property.
And China’s US bond holdings most likely now have a shorter duration compared to say 5 years ago when geopolitical tensions started to ratchet higher.  A shorter duration means that instead of holding US treasuries with say 7 years to maturity on average, it’s now only say 1 year, (I don’t have the numbers, and I don’t think it’s public but it’s worth asking your analysts to find out).  Essentially, China has already been reducing their interest rate exposure to US bond markets, which means being a big seller is not as painful.

It’s a lot to digest so more details will be in my new YouTube channel launching in May, where I will be discussing the Aus-China-US relationship each week, including;
1.      How Islam and Christianity shaped and continues to shape this relationship…especially since 9/11 in the year 2001
2.      Why history repeats itself…because human nature does not change
3.      Worst case, best case and likely scenarios for investors when national security now influences the business and investment world
4.      Applying Pascal’s Wager to current tensions (Pascal, a 17th century mathematician/philosopher and his bet on ‘God or no God’…one outcome being so severe, you’d better put in significant effort to be correct when making your wager)
5.   Why the media and their opinions (I thought it was news?) is increasingly influential in this relationship, and how to search for the truth in a polarising world
6.      The biggest tank battle since WW2 has already started….the battle of the think-tanks
7.      Why China is the strongest supporter of democracy in the West (hint, Trump or Biden as president for life is harder for China to deal with)
8.      Why I’m starting a YouTube channel, not a hedge fund

Corelogic reports monthly movements in Australian home prices.  May to Sept last year were all negative monthly numbers (a cumulative negative 2.8% for combined capital cities).
This means 2.8% will be added to the annual home price growth rate by the time the Sept 2021 home price index is released.
Annual home price growth is currently 4.8%   Feb and March 2021 saw monthly rises of 2.0 and 2.8% respectively.  Assuming home prices rise just 1% per month (on average) from April to Sept 2021, this means we will be seeing a 13.6% annual rise by Sept.  (4.8% plus 6% plus the 2.8% added back)
If home prices rise say 1.5% each month from April to Sept, we will be seeing 16.6% annual growth rates.  If its 2.0% on average each month, the media will be trumpeting a 19.6% annual increase by September.  Caveat being RBA’s efforts to slow lending, and the likelihood of rising interest rates as noted in my article above.

See past newsletter links below
Investing in an age of superpower rivalries. Oct 10, 2019
Sun Tzu, Machiavelli and the Australian government. First amongst equals. Aug 22, 2019
Trump-Xi…. Avengers Chess – the endgame Aug 14, 2019
China short squeeze only a brass monkey can withstand. Progressive plausibility. Aug 9, 2019
In the land of the blind, the one-eyed man is king. A ‘Game of Thrones’ when traversing the Aus-China corridor. April 29, 2019
Crazy Rich Asians in a Trumpian World. The best of times, the worst of times, an age of wisdom, an age of foolishness Oct 3 2018