The View From China on Australian property

My business partner CT Johnson writes on the Chinese love affair with Australian property, and gives insights on the ‘settlement risks’ on off-the-plan apartment purchases.

Despite continued concerns that China is losing its appetite for Australian investment property, facts on the ground tell a different story.  The Chinese continue to settle on purchases they signed up to three years ago.  They continue to buy off the plan for new developments.  They are still at the forefront of auctions here in Australia.  My bet is that it will stay that way for a long time.

I’ve covered my thinking on this before, but what it boils down to is that there are factors in China, in the rest of the world and in Australia that continue to make Chinese buyers see Australia as an attractive investment destination.

While the Chinese are proud of their nation’s economic progress, and appreciate the huge financial opportunities it provides them, they remain wary of China’s basic social and legal infrastructure.  This manifests itself on a number of fronts.

In particular, the Chinese worry about the fact that the rule of law is tenuous and weak.  Xi Jinping’s ongoing anti-corruption campaign, while welcome on one level, is a powerful demonstration that the law means what the Party and Xi say it means.

The recent change in the enforcement of currency regulations, which has significantly restricted outbound cash flows and forced investors to hold RMB-denominated assets, have left the Chinese feeling exposed to macroeconomic, fiscal and political issues far beyond their control.  At the moment, currency effects continue to make Australian property look attractive: 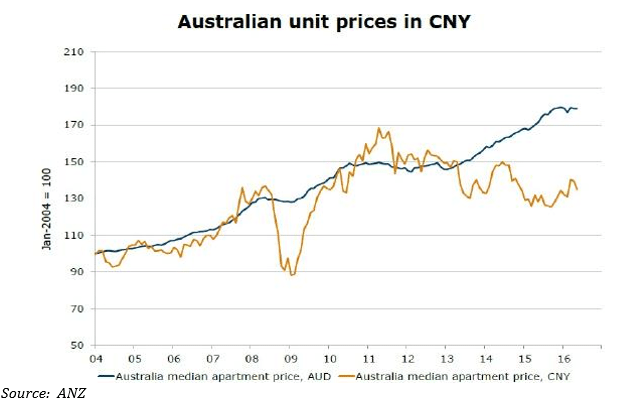 But the Chinese know this can change at any time and without warning.  These currency restrictions will likely continue until China’s terms of trade improve.

The leasehold basis of property ownership is another factor that sits badly with Chinese investors.   All non-agricultural property rights in China are based on a 70 year lease, commencing from the date the land was converted from agricultural use.  The concept of a freehold doesn’t exist under Chinese law, reminding investors that their property rights are at the continuing pleasure of the government.

Aside from issues related to the rule of law, the volatility of its property and stock markets in China is another major source of problems.  The Chinese stock market, as embodied by the Shanghai Composite Index, has a disturbing habit of losing a third of its value in panic-driven sell-offs, something that’s happened twice in the past 14 months.  Likewise, Chinese property prices can fluctuate dramatically, driven by insider deals and arbitrary government policies.

All of these things drive insecurity within Chinese investors, and create an urgent desire to geographically diversify their asset holding.

Which brings us to the rest of the world.

Largely due to the rule of law, high quality of life and perceived attractiveness as destinations for immigration, North America and Western Europe are desirable places for investment.

To a large degree, the US, Canada, UK, France and Germany solve the problems Chinese investors face at home, with the additional benefit that they are pleasant places to live and raise children (the Chinese have a remarkable attachment to investing in places to which they intend to immigrate, or to which they intend to send their children for school).  However, they also have issues that reduce their allure.

France and Germany are generally seen as second-rate choices for investment because their economies are neither as large nor as vibrant as other possible destinations.  France and Germany carry the added disadvantage of not being English-speaking, which is regarded by many wealthy and middle-class Chinese people as a requisite for immigration, or sending their children to school.

The US, Canada and UK are highly desirable places to invest, immigrate to, and send children to school.  But all three have significant restrictions on immigration.  The UK, although very prestigious, is very expensive, even by the standards of buyers from Beijing or Shanghai.  Canada is also increasingly expensive, especially now with a 15% tax on foreigners buying Vancouver homes.  The US, while extremely glamorous and much less expensive than the UK, has the added problem of being increasingly at odds with China politically.

Which brings us to Australia.

Australia is a society strongly based on the rule of law.  Capital can move freely.  Property can be owned outright, not just as a leasehold.  It is English speaking.  It is politically less problematic than the US.  It has an outstanding educational system.  It is close and in the same time zone.  It already has a substantial Chinese immigrant community.  It is beautiful.  The air is pure and the food is clean.  My Chinese friends routinely tell me that Australia is the nicest place on earth.

Given this context – the issues in China, the challenges in the rest of the world, and the attractiveness of Australia – it’s absurd to judge the behavior of Chinese property buyers against the same yardstick as Australian ones.

A Chinese investor’s pain point is much higher than what’s generally perceived in Australia because the Chinese have a far greater need for security and far fewer ways of achieving it.  The risk of a small decline in property prices (assuming they’re not offset by currency movements), or adding another 4 percent to a foreign buyer’s stamp duty, simply isn’t material to someone wanting to get a big chunk of their wealth out of China.

The above also assumes that the Chinese buyer is actually a foreign national and not an Australian citizen or permanent resident.  In recent years, Chinese immigrants have numbered 16,000 annually, adding to the already substantial Chinese immigrant population in Australia.  By one calculation, the number of people living in Australia who were either born in China, or who are the children of someone born in China, is over one million.

These people have capital resources, either individually or pulled from family and friends, which they can use to buy properties in Australia in their name.  Hence, the perception that there are many foreign buyers when, in fact, a large number of them are new migrants.

In the year ending June 2014, there have been 14,700 FIRB approvals (on Chinese purchases) that will be due for settlement starting from mid 2016 onwards.  This compares to 25,400 approvals in 2015.  It’s likely that China’s currency restrictions will have eased by the time the vast majority of these settlements come due.

In the meantime, the non-banks have been moving to fill in the funding gaps.  Our research in preparation for our Aus-China Non-Banking Lending Conference on Sept 22 in Sydney has found that a large number of local and offshore lenders are stepping into the breach left open by the exit of Australian banks.

Many more individual ultra-high-net-worth lenders, hedge funds and private businesses are also urgently exploring opportunities, particularly as risks can be mitigated with loans made on low LVRs. 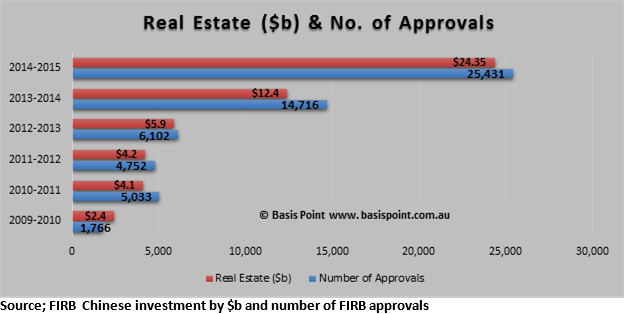 Chinese investors settling now are looking at 15-20% capital gains on apartment purchases made 2 years ago, based on index price movements over this period in the East Coast cities.  Then there is a 5 -15% currency profit based on the AUD/CNY exchange rates in 2013/14 to now.

Again, this picture is consistent with facts on the ground.  Mirvac recently pointed to higher than anticipated residential settlement rates as one of the reasons for its strong 2016 financial performance, telling the Australian Financial Review that they expected settlement rates to remain unchanged throughout 2017, and that FIRB buyers (the majority of whom are Chinese) posed no additional risk to their business.

(* Even should this 30-45% profit margin dissipate, particularly for those Chinese buyers who bought during the June quarter 2015 peak against possibly lower or flat prices at settlement in 2+ years’ time, the reasons discussed earlier in this article indicates most will still settle.)

Please contact me if you wish to participate in Basis Point’s non-bank lending match-making service between property developer & settlement pipeline borrrowers, and our growing pool of non-bank lenders.