Sun Tzu, Machiavelli and the Australian government. First amongst equals. 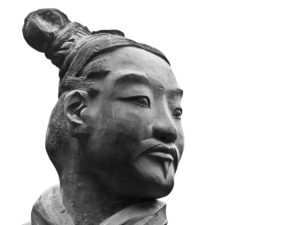 The Australian government has done a tremendous job in playing off both sides of the emerging US-China cold war.

In a move Sun Tzu would have approved of, Australia has nimbly adopted the “bird in hand is worth beating around the bush” strategy…. that I coincidentally suggested soon after Prime Minister Morrison took office (see my speech of 22 October 2018).

The bird in hand is Australia’s economic gains from China, while ‘beating around the bush’ on national security issues has meant neither the US nor China have been able to force Australia to ‘choose a side’.

In a masterful tactic worthy of Machiavelli, the constant barrage of contradictory comments from parliamentary front and back benchers, about how Australia views China and US, have left both elephants in the room punch drunk and confused about Australia’s position.

This confusion has kept the status quo, enabling Australia to reap the export and business benefits from China, while remaining under the protective wings of the American eagle.

Additionally, the clever use of seven Prime Ministers over the past 11 years has created a revolving leadership target that no superpower has been able to pin down.

Political science students for generations to come, will be in awe of how a middle power could successfully duck and weave amongst rival superpowers for so long.

But one day, the elephants will see through Australia’s ruse.

I suspect the Australian government will double up on its strategy. Hit them harder with contradictions wrapped in enigmas, clouded by half-truths, riddled with paradoxes.

Here is one possibility.

With Australia’s geopolitical savviness to the rescue, Australian exports, business and investments can continue.

Make hay while the sun shines…as dark clouds are forming …

Almost all our economic eggs are in the China basket.  There is no replacement basket.  Japan, India, SE Asia, Europe, North America do not need our goods and services as much as China does.

China is the goose producing our golden eggs.  And I mean goose in a nice way.  Dropping this China basket for ‘national security assessments’ at this point in time is a wasted opportunity to make the hay while the sun shines.

More clarity, even an independent ‘audit’ on the accuracy of national security risks needs to be carried out.  It would be a shame if another “oops, there were no weapons of mass destruction” (ala Iraq War, despite the ‘best’ efforts of US and allied intelligence assessments) was discovered after/if the goose was cooked.  And I mean ‘best’ efforts in a nice way.

To be fair, most risk analysts would prefer to err on the side of caution….ie better a devil we know (USA) than a devil we don’t (China).

But as the American author Stephen Covey wrote… Seek first to understand, then to be understood.

One example of mistaken information is the frequent description of Xi Jinping as a “princeling” and the glossing over his formative years, from aged 10 to his early 20s as he and his family were purged by the CPC.  If one gets this wrong, what else is wrong in these risk assessments?

My article on warlords, dissidents and democracy in China (written in Sep 2016 and still pertinent) and my article on China’s modern psyche (written in Oct 2015) could help in better understanding.

My next newsletter will be on specific opportunities for Australian businesses and investment in this new geopolitical environment.  Please subscribe to my free newsletters on the button below.