China’s BC and AD. Idle Rich and Idol Rich. An Epoch of Epic Proportions. 💯

The West’s history is divided into BC and AD. (Before Christ and Anno Domini…“in the year of our Lord.”)

China also is split into BC and AD. (Before Communism and After Deng…referencing Deng XiaoPing who modernised China from 1978 onwards)

But today, there is another epoch forming. NX (Now Xi)

Whether a friend, enemy or “frenemy” of the West, we can expect Xi to remain in power into his mid-80s, just like Deng, and like Singapore’s Lee Kwan Yew who retired as PM but remained as ‘Senior Minister’ into his 80s.

So for investors, analysts and politicians, getting a better understanding of China under Xi is critical.

I will be covering this further in both my Aus-China Philanthropy and SLO event on 8 Nov, and Investing in an Age of Superpowers event on 15 Nov, both organised by BasisPoint in association with Deloitte.

Some of the key points to be discussed:

“I believe the only one who can defeat us is ourselves, no one else.” This statement by Xi, made to senior CPC officials in January last year and only revealed publicly this week by the South China Morning Post, reflects Xi’s concern over internal division. This is the reason for his iron-fisted crackdown on dissidents, and how this impacts on the West’s view of ‘China’s social license to operate.’

And as it happens, Xi’s view was a topic I discussed two years earlier in an article titled Warlords, dissidents and democracy in China.

So how is it that a China analyst in Sydney is able to understand Xi?

Look carefully at the photos below of the seven most powerful men in China…the CPC politburo, helmed by Xi (top left). I share a secret with each and every one of them. A secret that helps us project our power and influence.

It is a practice we do individually, privately, and once a month. To find out, you will need to attend my events. 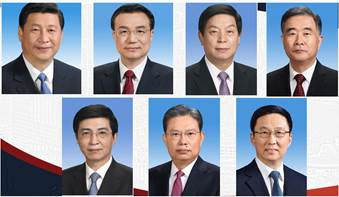 Other points for discussion

I hope to see you at the events. Early-bird rates end soon